Ms. Single Girl, are you looking for Mr. Right? 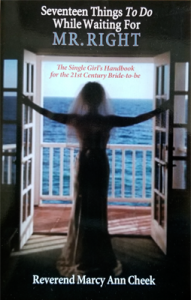 Hello Ms. 21st Century Bride-to-Be!  In my book, I raise and answer  some of the important questions every woman who wants to be married usually has today.  As sovereign, self-governing women, we can re-arrange our priorities and free ourselves from pressures: The pressure to work harder to compete with men on their playing field, the pressure to bear  all and to bare  all to obtain a companion. As a 2st century woman, we are learning to use what I call our “womb power” to  create what we want in life. If a woman desires to be married, she can create an environment that will eventually bring Mr. Right into her life, and he will ask her to marry him.  A life-long love relationship in marriage is what the man wants, too.  The book offers the single girl seventeen things that she can be doing rather than trying to find a man and while she is pursuing her purpose, Mr. Right will show up and ask her to marry him. And the book also tells wonderful stories of real weddings, discusses various wedding rituals and customs, and offers ideas for the 21st Century Wedding Ceremony.
Click Here to Download Free E-Book
Rev. Marcy Ann Cheek has gained national recognition for her work as a non-traditional wedding minister who has married over 4,000 couples at the great Southern California beaches. Although she says the marriage ceremonies she writes attempt to remove traces of the former bondage and slavery of woman’s past which reflect a time when women had no say so over their lives, she has penned a book which addresses a common desire she’s heard from even the most modern 21st century female: their desire to eventually find a man to marry, not just have a live-in sexual relationship. Cheek says, “I believe that most single women today still want the total commitment and reliable love of a life-long, monogamous marriage with Mr. Right.” But Marcy Ann says that finding that special someone may be a question of being Ms. Right! So Cheek gives the single girl 17 things to do while waiting for Mr. Right. She advises women to take a personal inventory of their possessions, current relationships and whatever no longer works. She offers worksheets and asks many questions.  Marcy Ann says, “I personally have done all 17 things I suggest in my book.
Cheryl Walker
Orange County Register Newspaper, August 2008